Outside of the classroom, freshman. Mishella Vishnevskiy, lives her double life on the dance floor as a competitive ballroom dancer. 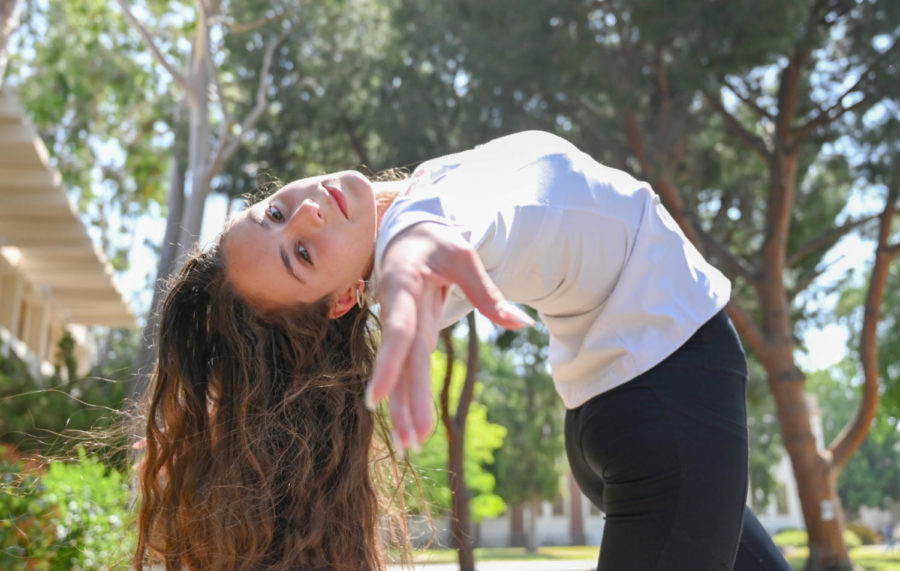 Eyes half-closed, she groans and lazily reaches over to grab her phone, agitatedly tapping the bright screen saying ‘5:34 A.M.’ to hit snooze.

She kicks the covers off, throwing her legs over the side of her bed. With a huff, she drags herself over to her closet, rummaging through all the shirts and jeans, and pulls out several colorful, sparkly dresses. She tosses them onto the edge of her bed, where an open suitcase lies.

A loud voice booms through the halls.

“Hurry up! We were supposed to leave 30 minutes ago, you’re gonna be late for your hair appointment!”

Rolling her eyes, she walks to the nightstand near her bed and pulls each drawer out, grabbing her earrings, self-tanner, steamer and effortlessly tucking them under her arm.

She pauses and mutters.

“What am I forgetting…?”

Realizing, she scrambles towards her bed and crawls under, reaching for her shoe brush and two pairs of dance shoes.

She heaves everything on her bed, hopping on one foot towards the bathroom as she pulls on her socks. After she’s done brushing her teeth and washing her face, she’s out the door and on the way to the salon.

For freshman and ballroom dancer Mishella Vishnevskiy, this is a routine she’s kept to since she was eight years old: waking up early in the morning, driving to get her hair and makeup done and boarding a plane to somewhere far away wearing a shimmery outfit and fancy shoes.
When Vishnevskiy was four years old, she was introduced to dance. At her friend’s house, her friends taught her the basic steps of “chicken dance,” a popular rhythm and blues dance where participants imitate the movements of a bird in a synchronized routine, to fast-paced music.

It was her first time dancing ever. She was intrigued, so she decided to ask her parents for a dance teacher who would continue to teach her everything about ballroom dancing.
“I always loved dance from the very beginning,” she said. “I loved dance and I loved going to practice.”

It was over a decade ago when the freshman started taking ballroom dance lessons at Edelweiss Premier Dance Studio in San Dimas, a suburb about 50 miles east.

Now a freshman, Vishnevskiy is a 19-time national champion in ballroom dancing, a seven-time world champion and a two-time champion at Blackpool, the world’s first and most famous annual ballroom dance competition held in Blackpool, England. She has also earned the title of “Best Dancer of the Year” award in England, given to her by the judges of the World Dance Council, an organization for competitive and non-competitive ballroom dancing.

Ballroom dancing is an umbrella term for a set of partner dances, enjoyed socially because of its entertainment aspects. While it might be a traditional activity, it’s also seen as a competitive sport.

In competitions, there are ten teams of duos who all compete against each other in two styles of ballroom dancing, Latin and Standard. Within Latin, there are five dances: cha-cha, samba, rumba, paso doble and jive. Standard is made up of five dances as well, such as waltz, tango, Viennese waltz, foxtrot and quickstep.

Vishnevskiy competes with her long-term dance partner freshman Daniel Novikov, who plans out their choreography alongside their dance instructor, Alla Novikova. Novikov attends Damien High School in La Verne. Outside of ballroom dancing, he does track and plays piano.

Working with a partner means putting in a lot more work than one would if they were competing alone.

“Sometimes it can be really challenging to dance with another person because you have to rely on them so we don’t mess up,” Vishnevskiy said. “Having arguments and little fights aren’t unheard of either. But overall it’s really fun.”

Vishnevskiy does rigorous training, practicing for several hours a day and five times a week if there is an upcoming competition.

Much of what happens during practice is about improving on what she already knows.
She’ll run through all ten dances in the Latin and Standard category with her dance partner. They’ll also work on their presentation and how they walk to the dance floor.

The moment practice is done, Vishnevskiy makes it a priority to take care of herself.

“I’ll get my nails done, sleep and try to relax as much as I can,” she said.

Vishnevskiy has traveled all around the world for competitions, competing in countries like the United Kingdom, the Netherlands and Ukraine.

She first traveled for a competition when she was eight years old.

“I loved it,” she said. “If I never danced, I wouldn’t be able to go to any of these places.”
Traveling all the time for multiple competitions a month also came with a lot of challenges like missing school, worrying about catching flights and sleep deprivation. But Vishnevskiy stays optimistic.

“You have to look on the bright side and what you can achieve,” she said. “You need to stay focused and remember what you went there to do.”

For Vishnevskiy, small competitions within the U.S. aren’t as mentally exhausting as competitions outside the country.

”There’s always a person in the back of my head yelling at me to do this or that, and it’s just really nerve-wracking and scary,” she said.

Then there’s the unrelenting self-doubt that follows her wherever she goes.

“I always think I’m doing everything wrong,” she said. “We might be improving, but in my head it feels like we’re just stuck, and it makes everything feel worse.”

She doesn’t let those thoughts defeat her though.

In a couple of years, Vishnevskiy sees herself in the medical field, as a nurse or a doctor. She’ll continue to pursue dance, but not as a full-time job.

“Winning never comes without a challenge,” she said. “If you run from the first sight of failure, you will never become successful.”