Multicultural Day: A taste of many countries

A celebration of diversity at school through food, music and performances related to various cultures. 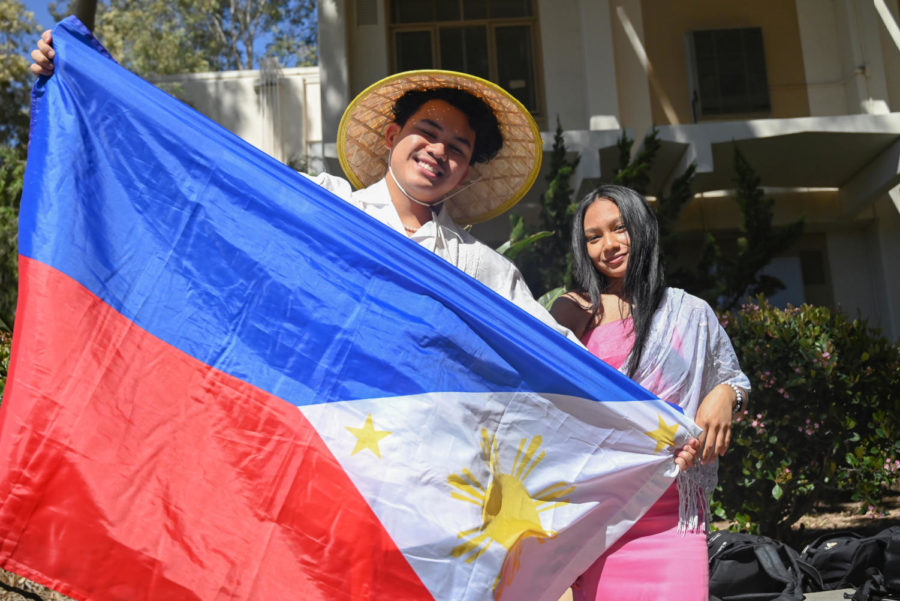 Students such as Seniors Gideon Genesis Dela Torre (left) and Maradie Sattra brought their national flags or wore traditional clothes to school on Multicultural Day to express their national pride. Even students not explicitly working a club stand expressed their cultural and national pride or supported other cultures by walking around with cultural items or flags.

By Diana Zalmanov and Allison Antonio

What is happening | Multicultural day took place at lunch today on the quad. During the event, clubs dedicated a booth to any country of their choice and sold food from that country, along with a culturally appropriate performance. Performances ranged from dancing and singing, to monologues and poems.

All performances took place on the quad. The Associated Student Body (ASB) had stands sectioned off for the clubs.

12 confirmed clubs took part in this event, with each club representing a country of their choice.

Since many clubs signed up, the only food being sold came from the clubs. Food at the event ranged from $3-5.

The schedule change consisted of an hour lunch with the school day ending at 3:32 p.m. Classes were cut short by five minutes each period to accommodate the longer lunchtime.

ASB Commissioner Brianna Carrillo and ASB advisor Mr. Jacob Ferrin were the ones who organized this event. Brianna Carrillo made the forms and prepared the event for the clubs and her committee as well. Mr. Ferrin helped her throughout the process.

Why does it matter |  Students had the opportunity to raise funds for their clubs, as well as experience a variety of cultures through music, performances and food.

“I want clubs to be able to sell the most they can during this event,” ASB Commissioner Brianna Carrillo said.

“I think multicultural day is important due to the diversity at our school,”  ASB Fundraising Commissioner Esther Kim said. “We have students from many different cultures here, so to have a day for us to embrace all of our cultures where we come to study every day means a lot.”

Who does this apply to | All students on campus were welcome to purchase food from participating clubs and watch their performances.