Let the symphonies be heard

❑ PHOTO STORY | LAVC Chamber Singers and the Vannaires team up during periods 5 and 6 to provide students with a vocal concert on Thursday, Dec. 9. 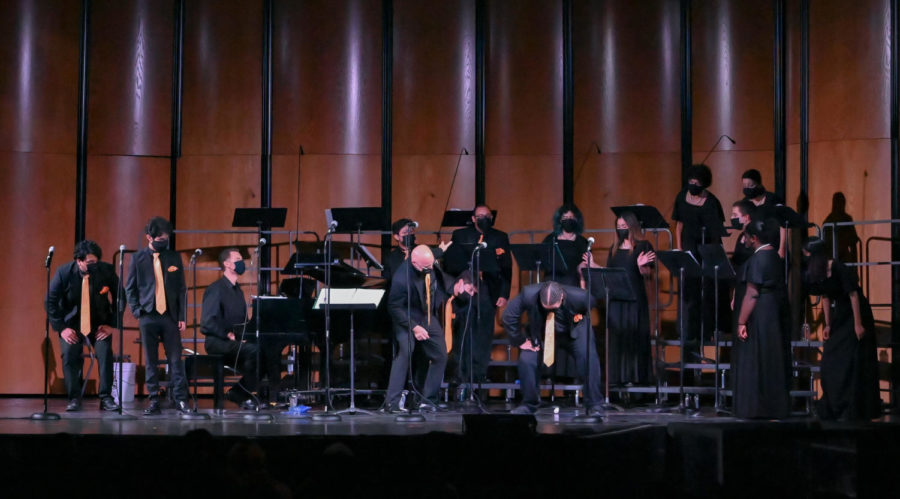 The LAVC Chamber Singers incorporated acting into their vocal performances to strengthen the message or story they were trying to tell.

The event featured two vocal groups: the LAVC Chamber Singers and the Vannaires.

Conducted by Glenn Carlos from LAVC, the LAVC Chamber Singers sang many numbers during the fifth period, notably “Lincoln and Liberty” a campaign song supporting Abraham Lincoln during his presidential campaign.

The Vannaires sang during the sixth period. They performed “Misty” arranged by Russ Robinson and “Come Fly with Me” arranged by Mac Huff.

Though the previous chorus director Ms. Arevalo was transferred by the vocal program, many of the Vannaires helped each other get through this tough time to create a performance that had to exceed expectations.

“The biggest hardship definitely was having to say goodbye to Mrs. Arevalo and adapting without a teacher, and also having to deal with many events and performances being canceled or postponed due to everything slowly returning back to normal,” junior Vannaires Vocalist Emilie Morales said.

Each member of the Vannaires relied on each other and helped each other grow, eventually culminating in their first official concert of the year.

“The Vannaires are all experienced and talented singers so we were able to teach ourselves music. Patience was key for us. We definitely were upset that we couldn’t have performed as much as we usually would have, but we’re grateful to keep everything going,” Morales said.

As musicians, the stage is one of the sources of their passion. It’s safe to say the Vannaires have missed performing on stage, as much of the music department did.

“It’s great to sing on stage again. The Vannaires, myself included, have definitely missed the stage,” Senior Vannaires Vocalist Edgar Muños said. “With many concerts yet to be performed next semester, we have multiple wonderful songs to learn and challenge ourselves with.”

This is not the last time the Vannaires will be singing. With a new teacher expected to take over the program, new performances will surface next semester.