Dealing with at home learning, student directors dwell on their hardships of last year and their return. 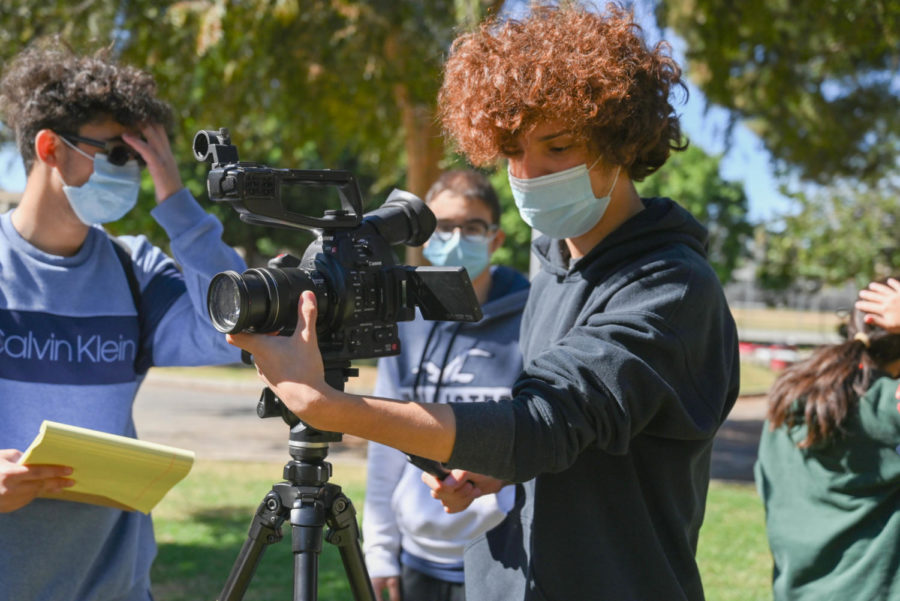 Angel Hernandez on the set of his film "The Enfreakening".

Film students are back on set.

Students needed to get creative with film productions during distance learning due to covid-19 regulations. Without access to the campus and equipment due to distance learning, resources to create films were scarce.

“We were limited to working mostly without any of our gear and without being able to work in crews or pods with other students,” film production teacher Thomas McCluskey said. “We had to redesign our entire workflow from scratch to accommodate all the changes.”

Despite the challenges, film production persevered.

“Last year we had around 50 finished films including an award-winning personal reflection, a music video, several horror shorts and trailers, a professional-caliber documentary and a stop-motion Transformers animation.” McCluskey said.

Now, filmmakers are back in a classroom full of professional equipment with face-to-face collaborations and real time guidance from teachers.

“Part of me is so relieved just to have the familiarity of everything back on campus,” senior film student Jane Luitweiler said. “A lot of it feels foreign in a lot of ways at the same time, but I definitely work so much better in the classroom. Being able to build those personal connections and have those intimate conversations that are so meaningful to working in the entertainment industry as a whole.”

While the school year is still relatively young, big moves are being made for video production. As the classes start to begin creating films, student projects will soon come into fruition.

“We’re looking forward to a lot of filming at school events and many great shows ahead,” Executive Producer Andrea Parada said.

Students are currently transitioning from working on films as assignments to writing scripts and pitches and filming concepts. Eventually, these will become films that will be shown at the school’s annual Film Showcase in which all projects are shown to students who attend and a select few sent to local student film festivals.

Some students are already in the production process. Senior Andrew Choto is working on his film “Overthinking.”

“It’s probably going to be about me or my brother and his girlfriend,” Choto said.

However, it’s not all sunshine and rainbows like in movies. Students have some adjusting to do.

Many students have not even stepped foot on campus or have seen a high school classroom.

“I felt excited that I got to finally experience working in a classroom and with new people,” sophomore Damien Flores said.

Van Nuys Live, the school news production, for example, is dealing with many big changes. Other than being back on campus, the production has a new crew, new hosts and new equipment.

The live YouTube broadcast has four shows a week: Mondays, Wednesdays, Thursdays and an extended broadcast on Fridays, in which film students’ videos are shown.

One of the biggest additions to the news is a teleprompter. A lot of effort has been put into integrating it into the production.

Along with the teleprompter, the school has acquired other equipment including an Arri Alexa Mini Camera, a state-of-the-art video camera used in many professional productions. Production crews are currently learning how to use it.

While students still have to deal with certain covid-19 regulations when dealing with projects, it’s much less restrictive than last year, and hopefully that will lead to better projects this year.

“We will see what we are capable of when we get to the advanced projects next semester,” McCluskey said. “I am hopeful that if we start with a solid plan, we can achieve great results.”