Batter Up: Preparing for the Baseball Season

Will this year’s baseball team make it to the playoffs? 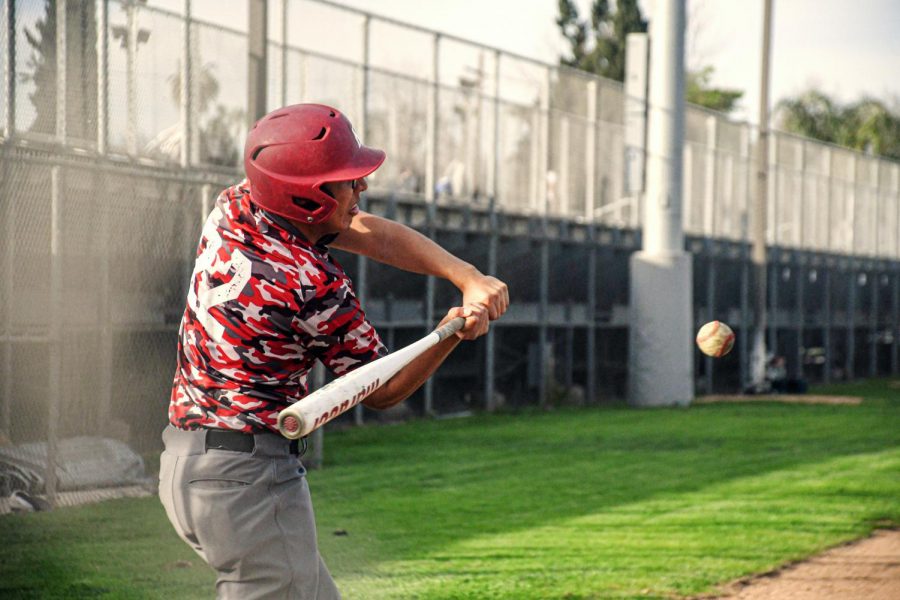 Ready to bat, co-team captain Anthony Islas steps up to the plate.

Will this year’s baseball team make it to the playoffs?

Last year’s team won 12 games and lost 10 for a pretty solid overall winning season. They made it to the playoffs but unfortunately lost with the score of 9-2 against South East (South Gate, CA).

Both the team and Coach Alfredo Avila are really confident about their chances this season. Thirteen players are returning that have played together before, so they know each other really well, and they’ve been in back-to-back playoffs together.

A more mature and more experienced lineup is ready to take the field.

Reyes feels like he’s going to get a lot out of his talent this year. He knows being team captain can be a tough job but he’s willing and ready to accept the challenge. His mantra for the team is “if you stay ready you don’t have to get ready.” He sticks by his words by always going making it to practice “even if that means waking up early while his teammates are still asleep” He’s the first person at practice and the last one to leave.

Anthony Islas, who has been on the team since he was a freshman, is moving up. It’s his senior year and he is also a team captain along with Reyes. He has three positions on the team: first base, third base and catcher.  “Everyday is a new opportunity. You can build your success or put your failures behind you and start over again. That’s the way of life.”

Incoming freshman Steven Tostado is a very much appreciated addition to the group. According to Reyes, he “has a pitch like no other.”  He brings a hard pitch and good batting skills to the team. He can hit the ball over the fence — which is rare for a freshman, and according to Reyes, he’s willing to work as hard as he needs to to make it to playoffs.

Keep an eye out for eleventh grader Justin Villanueva, the ace pitcher this season. He has a great cutter, about two inches of break, a really good curveball, a nice two sink fast ball, and a really good splitter. He plays first base, pitcher, and right field.

The person with the best instincts goes to eleventh grader Holden Daddario, who plays center field and pitcher. He’s really smart, calm, knows what he’s going to do before he gets the ball and really great at planning things out in a short amount of time. He also has the best baseball IQ.

Joshua Son is an eleventh grader with jaw-dropping batting skills. Every time he steps into the batting box he’s hitting the ball very hard, and hitting it over the fence with ease.

Practice makes perfect and the team has been practicing since the summer every Monday through Friday during sixth period and after school. Most players also attend a Saturday practice.

Along with practice, teamwork is the key to a strong season showing. And the playoffs. And the championship.

“No matter how bad things get, as long as we stay together and be one unit anything can happen,” said Coach Avila.

He plans on sticking to that.