Tyler Lets It All Out On “IGOR”

Be prepared to go on a trip on Tyler, The Creator’s most personal album yet; “IGOR”. 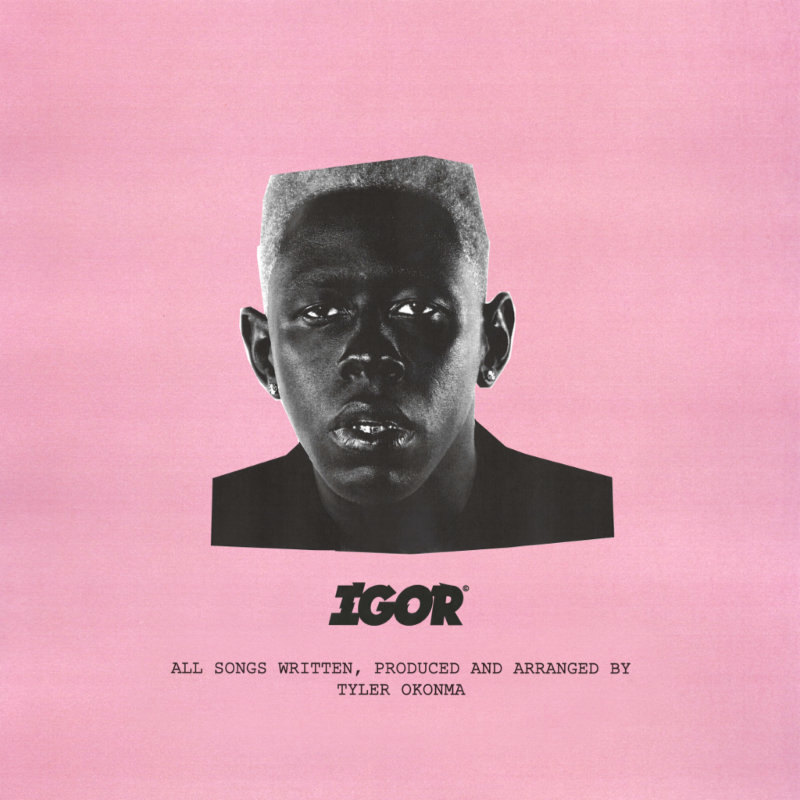 The official cover of "IGOR"

In all honesty no one knew what to expect from the musical artist Tyler, The Creator. Each of his albums have been different from the last one and fans and critics were excited to see how Tyler Okonma would open this brand new chapter in his music career.

“ IGOR’S THEME ” 9/10
Right off the bat Tyler is instantly able to grab my attention with this intro. The synths do not feel overwhelming at all, in fact they even felt relaxing. I had no idea who was the singing the chorus for the song but after I found out it made me revisit it again and enjoy it even more. Symere Woods, known to many as Lil Uzi Vert actually co-wrote “IGOR’S THEME” and was singing. Kali Uchis also joins Uzi later on in the song. Unknown features is repeatedly shown in this album. This was a great way to start the album.

2. “ EARFQUAKE ” 10/10
This song is beautiful, charming, and captivating. Tyler’s production is on a whole other level here and his growth as a producer is shown. On top of that we had the best feature on the album with Playboi Carti. Baby voice Playboi Carti takes the listener to what feels as a whole other universe. Listening to Carti’s verse is as close as I can get to my dream state while awake . On top of that we have Charlie Wilson on the bridge and possibly Jessy Wilson on the backup vocals.

3. “ I THINK ” 9/10
Tyler teams up with Solange who sings the chorus in this song. The jumpy and enticing beat makes you just want to sing and dance along.

4. “ EXACTLY WHAT YOU RUN FROM YOU END UP CHASING ”
This serves as an interlude on “IGOR” and perfectly transitions “I THINK” to “RUNNING OUT OF TIME”. This isn’t a song so we won’t be rating it but it perfectly serves its purpose.

5. “ RUNNING OUT OF TIME ” 10/10
The dreamy and atmospheric beat makes for a peaceful listen. The songs play on words makes it such an emotional and attaching song on the album which fits perfectly with the theme of “IGOR”. “ So, take your mask off, I need it out the picture, take your mask off, stop lyin’ for these ****** ”

6. “ NEW MAGIC WAND ” 8/10
This is one of the most interesting and intriguing songs on the album. Tyler acts as a mad scientist on this experimental song. It is three minutes and fifteen seconds of a new sound for Tyler but one that does pay off. When listening to this song you must come open-minded.

7. “ A BOY IS A GUN ” 9.5/10
This song starts right off the bat with “ No, don’t shoot me down ”, and this can be interpreted in so many ways. Tyler seems to be talking about a past lover of his who keeps on “shooting” him down but I found this title really interesting because you can make a connection to police brutality on black Americans. The production and sampling is on point as always and the faltering vocals on the chorus really spices things up.

8. “ PUPPET ” 9.5/10
Kanye West himself joins Tyler on this song. This is one of the darkest songs on the album, if not the darkest song on the album. “ I’m your puppet, you control me, I’m your puppet, I don’t know me ”. With his voice pitched up Tyler is talking about how this past lover of his kept on taking control and advantage of him. Kanye’s verse short and atmospheric as it feels as if he is rapping it from a long distance away and it sounds great. At the 2:06-2:07 mark the slow and bubbly beat takes a dark and ominous turn with what appears to be Solange’s vocals in the background.

9. “ WHAT’S GOOD ” 8.7/10
This song was teased on Tyler’s instagram (@feliciathegoat) on May 3 and was one that definitely hyped the project up even more. The effects on Tyler’s voice on the first half of this song fits perfectly as he’s doing an “announcement” on it. On the first half of the song Tyler is throwing shots at other celebrities, whom we do not know of. On the second half of the song we hear Tyler’s normal voice and he seems to be talking about events that has happened leading up to the point of “IGOR”. “WHAT’S GOOD” definitely makes for an interesting listen and a difficult one to decipher.

10. “ GONE, GONE / THANK YOU ” 10/10
This is my personal favorite song off “IGOR”. Standing at 6:15 it also the longest song off “IGOR”. The production is absolutely fantastic and the lyrics are incredibly beautiful. “Or maybe it’s just a dream that I can’t seem to wake up from” is a line from this song and it honestly explains what it feels like to listen to “GONE, GONE / THANK YOU”. The 2:55 mark is so peaceful as just the dreamy and indulging beat is left by itself for the listener. On top of that at 3:01 Cee Lo Green joins in the chorus which makes the song an even richer experience than what it already was. On the final two minutes of this song Tyler raps more than he has at all on “IGOR”. This song is also one of the few songs where Tyler seems to be coming to peace with the events that had happened with his lover. “But I finally found peace, so peace.” At 4:36 we get a peaceful outro to this masterpiece of a song.

11. “ I DON’T LOVE YOU ANYMORE ” 9/10
Tyler is telling, in fact at times yelling to himself, that he is completely over the person who broke his heart. We have what seems to be Solange and Jessy Wilson harmonizing on this song. The conflicting feelings on this song feel so pure and genuine.

12. “ ARE WE STILL FRIENDS? ” 10/10
Tyler makes sure to finish strong on this album as he gives us one more glimpse of his thoughts and feelings. The ambient beat and atmospheric vocals makes this listen so perfect. One of Tyler’s biggest inspirations, Pharrell Williams, can be heard on this mesmerizing track as well. This final shows Tyler’s true emotion to this person who broke him. But as he says on this outro, “I don’t want to end this season on a bad episode”.

Andre: When I listened to Igor for the first time, I didn’t know what to expect, but I really did enjoy it. I had given it an 8.5, but I wanted to dive and listen to what Tyler had to say. Finding out what the album means, what it took to create it, and what its purpose is what makes it special. A few days before the release of “IGOR” Tyler made sure to tell his fans and the public that this project would be nothing like his previous works. He stated it over and over again to make sure you would come open minded to this project. After giving the album countless relistens it was no surprise that my rating for it would change. Taking a look at the lyrics, trying to figure out who the features are (which Tyler has now released), and taking a trip into Tyler’s mind felt so nostalgic and breathtaking. This is an album about Tyler getting his heart broken and how he overcomes it. That is how “IGOR” was born. “IGOR” is not a rap album, it’s Tyler experimenting and taking his creative skills to a whole other level. With this project I think Tyler has solidified himself as not only one of the best musical artists in the game, but also as one of the best producers. When listening to this album you must come open minded, I cannot stress this enough! Put all distractions aside and pay attention to detail. “IGOR” is a journey you do not want to miss out on.

Tristan: This has to be one of my favorite albums of this year and definitely my favorite Tyler, The Creator album. The instrumentals are a refreshing reminder of how much Tyler Okonma has evolved from album to album. From “Cherry Bomb’s” explicit, demonic lyrics to “Flower Boy’s” sweet melodies, Tyler shows his diverse capabilities as an artist. Tyler’s newest album is reminiscent of “Cherry Bomb” because it utilizes a lot of bass and synthesizers to create white noise. “IGOR” has already shown how popular it is, by gaining the #1 album on Billboard. I wouldn’t be surprised if Tyler won a Grammy for this incredible record.