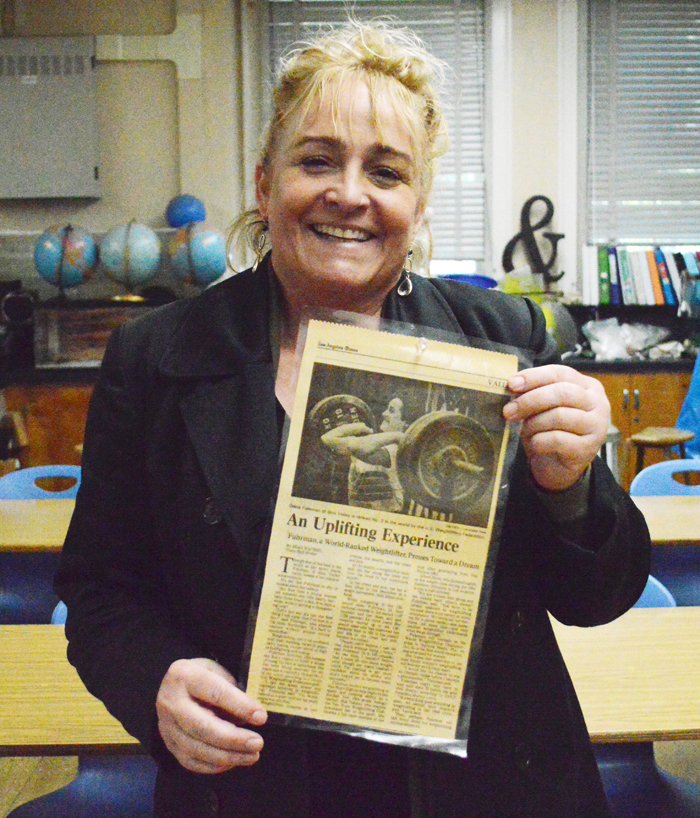 Ms. Fuhrman holds a newspaper featuring her earlier days as a weightlifter.

A teacher on campus once dreamed of becoming an Olympian.

Ms. Diana Fuhrman began her athletic career at the age of 16 during her school years at Van Nuys High. For three years, she played tennis and track.

“I wanted to compete in pole vaulting and thought it would be really cool, but the track coach said women can’t pole vault because when they plant the pole, their breast tissue might tear off,” Fuhrman said. “I thought that was crazy.”

As she practiced for doubles tennis, former biology teacher Mr. Robert Takano approached Fuhrman, asking if she wanted to be trained in weightlifting and promising that it would make her a faster player.

Fuhrman accepted Takano’s offer, believing that her coach had a vision to train women and prove their equality to men.

“I loved watching it, I loved doing it. I loved the adrenaline rush of competing and the comodery of lifting.”

With hopes of someday joining the athletes in the Olympics, Fuhrman worked countless nights training for smaller national competitions, including the Olympic Festival. She won all of the events she competed in and eventually worked her way up to world events, representing the United States.

In addition, she was invited to the NISSAN cup in Canada, MOOMBA cup in Australia and many other international competitions.

“I got to travel everywhere with people that had the same weird passion as I did.”

One of the challenges that she faced was the discriminatory Olympics in the 1980s. Men were allowed to live at the Olympic training centers and train all day with free meals, housing and personal trainers. Women were deprived of these privileges and were only allowed to eat, train and lift for a week.

But despite these problems, Ms. Fuhrman placed first and fourth in the United States Women’s Weightlifting in her weight class. During the Olympic Festival at UCLA in 1991, she made plenty of American records.

In 2016, she was inducted into the Weightlifting Hall of Fame for being one of the best female weightlifters of all time.

But every sport comes with injuries.

During a training session, Fuhrman tore her rotator cuff, ultimately halting her training for the Olympic trials.

Taking a break from her weightlifting career, Fuhrman became a part-time high school coach at Van Nuys. She obtained credentials from the U.S. Weightlifting Federation, qualifying as a level two and a national strength and conditioning coach certified by the NSCA.

“I coached kids in this very school ,” Fuhrman said. “One of them, Rebecca Shouhed, even won a bronze medal in the Junior World Championship.”

When women were allowed to compete in weightlifting in the 2000 Olympics, Fuhrman qualified at the National Weightlifting Championships and competed at the first Olympic trials for women’s weightlifting.

However, in order to continue her training, she would have needed to quit her teaching career; she believed it was too much of a gamble to risk losing a good job. She also thought she had slim chances in getting drafted to the Olympic team, considering her competitive weight class.

After the Olympic trials, Fuhrman decided to end her training and let her dream live on through her students.

Ms. Fuhrman’s advice to anybody who wants to start weightlifting is “to find a coach who is experienced and has seen millions of lifts.”

Though Fuhrman may not have been able to compete in the Olympics, her passion for weightlifting continues on to this day.