Meet Aaliyah Ali-Khan, a singer, a violinist and a teacher. 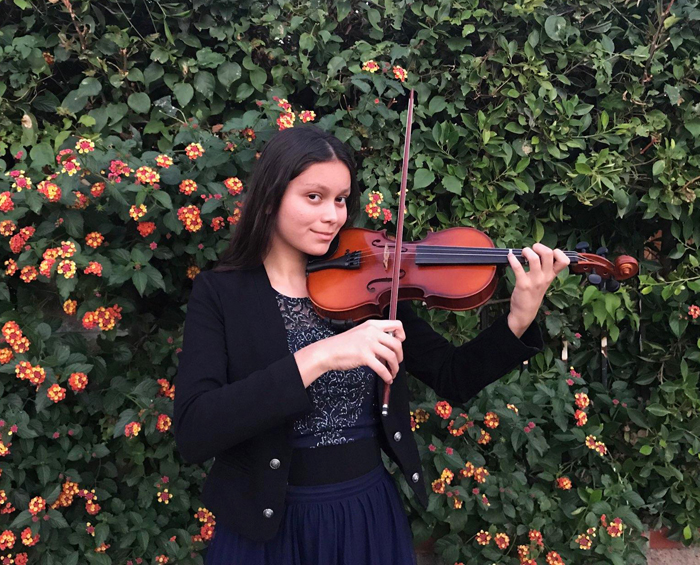 Aaliyah Ali-Khan has an array of musical abilities, ranging from singing and conducting to playing the piano and violin.

In fifth grade, Ali-Khan was selected to be part of the Summer Encounter program, a music and theater program for elementary school students at Colburn School of Performing Arts.

She was offered the Summer Encounter scholarship for her middle school and gladly accepted the offer. After auditioning, she also received the Herbert Zipper Scholarship, which provided full coverage for private instruction.

Ali-Khan is a member of Master Chorale, a competitive chorale where only 30 top auditionees are selected in California. The selected group is invited to community centers to perform pop and classical songs. In honor of Spanish Heritage Month, they performed a Spanish Heritage performance at Huntington Park.

“It’s a great experience because you get to meet new people,” she said.

She also sings worship songs with the United States Monumental Choir, occasionally travelling and performing in countries like Mexico, Columbia and Europe.

“It’s a great experience because you get to network and see different types of affluent societies,” Ali-Khan said. “We get to bring it all together through our love for music.”

But Ali-Khan is not only a student, but she is also a teacher.

For two consecutive years, she has directed and conducted the choir at Church of the Living. She instructs three choir groups: the Children Choir, the Youth Choir and the Adult Choir. She also teaches private piano lessons for children, including her cousins.

As a math and science magnet student in her senior year, Ali-Khan is not involved in any performing arts programs at Van Nuys High School. School rehearsals would merely interfere with her outside programs after school in Downtown L.A. However, she took AP Music Theory during her junior year.

“I really want to network and get involved in music at school, but all of the rehearsals are after school,” she said. “I need to leave immediately after school, so I can make it to downtown on time.”

Her music teacher, Ms. Kathy Sawada, once said to her, “The day you don’t eat, you don’t rehearse.” Driven by her teacher’s words, she aims to rehearse for at least three hours every single day.

At a young age, Ali-Khan’s love for music was sparked after her father left the family, which left her feeling unstable until she discovered that music helped ground her. Her opportunities at the Colburn School made her feel welcomed as she was surrounded by people who shared her interests.

Dedicating part of each day to her music, Ali-Khan practices musical pieces assigned by her teachers and various compositions of her favorite composers on the piano. During the evening, she does music theory homework from her class at the Colburn school, vocal warm ups in the morning and afternoon and instructs choir groups Monday, Tuesday and Saturday evenings.

Ali-Khan also performs at the Walt Disney Concert Hall, the Dolby Theatre and many other renowned theaters each year. Her most memorable moment was her first time performing at the Dolby Theatre.

“Everyone had their own dressing room so you felt like an actual ‘superstar,’” Ali-Khan said. “Going on stage performing at the Dolby theatre was something I can never forget. There were thousands of people there, who are there not to judge you, but to appreciate you, and it feels like everything you’ve worked for has a sense of purpose.”

Her inspiration is her church apostle, Naason Joaquin Garcia, who inspires her religiously and  academically as she struggles to balance school, music and church. Contrary to others who discouraged her from pursuing music and claimed that there were few job opportunities for musicians, her apostle insisted that she follow her passion and pursue music.

Ali-Khan’s best advice for aspiring musicians is to remain persistent.

“The most successful person is going to be the person who goes the extra mile, stays after hours and talks to the professor about music,” she said. “Anyone can have talent, but that doesn’t mean they’ll be successful.”

As she plans on majoring in business law and minoring in music, Ali-Khan hopes to apply her musical knowledge into her side career as a composer.