Learning To Teach: A Lesson In Challenges

Meet Mr. Aronson, a student preparing to become a teacher. 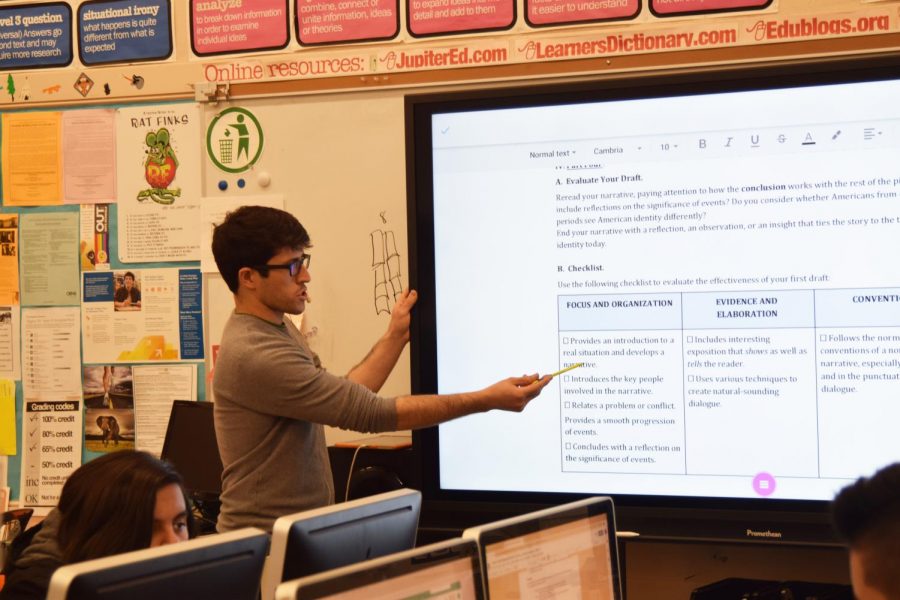 What came first, the teacher, or the student? Though that question may be too complex to answer, a student teacher is soon to sprout his wings and leave the nest of Room 112.

Mr. Aronson is a student-teacher and a full-time college student who has been teaching English 9A this past semester.

Currently enrolled in a credential program for a single subject at CSUN, he is required to instruct a high school class for one semester and a middle school class for the other. After his terms, Mr. Aronson will take the edTPA, an assessment that evaluates his teaching skills. By following these requirements, he would earn his credential in becoming an official English teacher.

Mr. Aronson only teaches during fourth period, where he provides his students with grammar and rhetoric practice, writing assessments, text analysis and short stories. He sets up his lesson plans during third.

Although he devotes his time to teach, Mr. Aronson continues to focus on his CSUN courses. He balances his work by completing his school assignments at home or during his break time at Van Nuys. After teaching at school, he goes directly to CSUN to attend his classes.

“It’s a pretty demanding workload so it kinda cuts into the time that I would like to have for planning for this class,” he said.

But Mr. Aronson was not always planning on becoming a teacher. In fact, he thought he left the world of education behind after his high school and early college years.

He initially majored in psychology to become a school psychologist; many of his college courses furthered his interest in the subject. However, after discussing his plan with many teachers and counselors, he learned that the job was very demanding and provided little benefits for him. He eventually switched his majors from Psychology to English to become a teacher.

“I wanted to get my feed of the classroom and understand what it’s like to be at the ground-level of a high school and middle school education experience,” he said.

Mr. Aronson is not the only person interested in teaching in his family. Three of his relatives are already educating students at the elementary and high school levels.

Though he can receive advice from any of them, he mainly affiliates with Mr. Goins–who works in the same room.

Besides his substantial workload from his teaching career and college classes, he is not fully experienced with the Mac computers in his room, especially when the internet goes out. When tech support comes in during class time, he is merely constrained to find an alternative way to teach the class.

“I wasn’t really trained to work in a fully-integrated classroom,” Mr. Aronson said. “I lose access to everything and I have to think on my feet and reevaluate what we’re gonna have to be doing throughout the day.”

Although many teachers face issues with students and their inside jokes, Mr. Aronson believes that he relates with his pupils on a personal level, considering how he has been in their shoes not that long ago. However, keeping up with their culture still poses a challenge for him.

Mr. Aronson has become interested in public education and the politics that are involved with the subject. He also wonders about how the United States is constantly falling behind in terms of national averages to other developed countries.

“I think there’s kind of a renaissance in education right now in terms of how we address a really diverse student body, and I want to be a part of that,” he said.

Noticing that students are reading less books and shifting towards technological activities, such as watching TV, Mr. Aronson considers the reasons behind this behavior.

“We kind of value what’s quick and easy, what’s entertaining, and what’s educational,” he said. “I think that a lot of people think in the short term as opposed to the long term, and that leads them to devalue education and think that they can just become a Youtube star and not have to educate themselves.”

He also recalls the signs that were prevalent during his high school years.

“I’m a millennial myself, and it was becoming prevalent in my generation because by the time I was in seventh grade, we had the first wave of Nokia phones, playing snake all the time. It just got worse from there,” Mr. Aronson said.

The student-teacher does have a few plans in mind for the near future, one of them being an official teacher at Van Nuys High.

Mr. Aronson believes that students who feel hesitant about majoring in English should not worry and don’t need plenty of experience.

“Just start reading,” he said. “Get your hands on all types of information whether or not it’s entertaining. Don’t limit yourself to what’s quick and easy.”