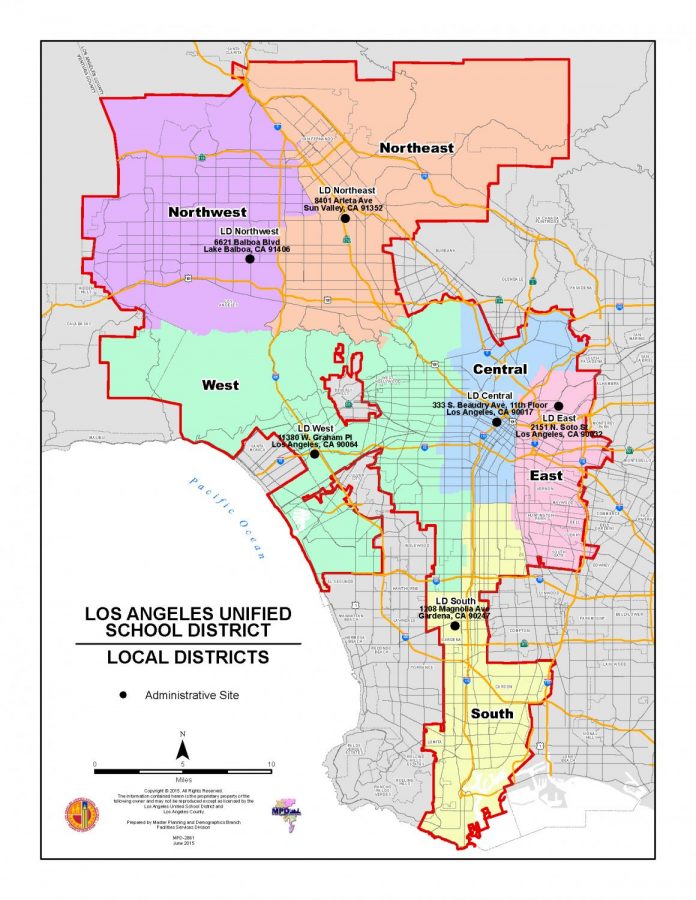 The six sections of LAUSD

LAUSD may be restructuring.

When Austin Beutner was selected as the LAUSD superintendent at the beginning of the school year, one of his main stage issues was reducing bureaucracy within the district and his recently uncovered proposals intend to address this issue.

Beutner’s plans to decentralize the second largest school district in the country were revealed in the Los Angeles Times through anonymous sources.

Based on their geographic location, the proposal involves breaking down these districts into 32 “community neighborhood networks” of elementary, middle and high schools who will report under regional offices.

Beutner’s proposal implies that decision making will be more decentralized, allowing each network to have more control of operations. The central office may also be reduced in size.

“In doing so, we can talk with school leaders and make sure they feel empowered to make a change.”

This will move resources closer to local leadership which, as claimed by Dr. Baca, will save money. Decentralization will also redistribute funds as the district hopes to achieve greater equity. The operation of the networks involve “making sure schools that are more needy get their fair share of the dollars.”

He also claimed that this restructuring will cater to the different needs of the diverse population of the district.

“With a more personalized approach, the goal is to be more responsive on what students and school needs.” said Dr. Baca.

When the superintendent is expected to announce the plan publicly is still unsure as details are still being laid out.

However, before the plan can be implemented, the proposal needs to be approved by the Board of Education.

Some aspects of the proposal may be gradually implemented through the next school year, 2019-2020 but the specifics are still undetermined. It may take two-three years before the full restructuring is put into effect.

Addressing the bureaucracy and decentralization have long been issues that superintendents have tackled, dating back to 1993.

While some failed, one proved to be successful. Ramon C. Cortines, superintendent in 2015, decentralized LAUSD, cutting it into six regional mini-districts, a structure still in place today.

The proposal to further decentralize district operations comes as LAUSD and UTLA are battling  over salary and contracts. UTLA expressed their disagreements with Beutner’s plan in a statement posted on their website the same day the story was leaked.

“Getting rid of central oversight and accountability would allow the unchecked spread of the worst of the charter sector abuses: not serving all students, financial scandals, misuse of public funds, and conflict-of-interest charges,” the press release stated.

UTLA President Alex Caputo-Pearl thinks that restructuring will likely cost more rather than save money.

The union also criticized Beutner for the lack of “authentic involvement” within parents and teachers in developing the plan. However, district officials told the L.A. Times that 1,500 parents, teachers, administrators and community members were involved “in a series of meetings since August.”

The union also expressed dissatisfaction with Beutner’s alleged movement towards school privatization and the promotion of chartered-operated schools.