A new bill that would push back start times of California middle and high schools is vetoed by Governor Jerry Brown. 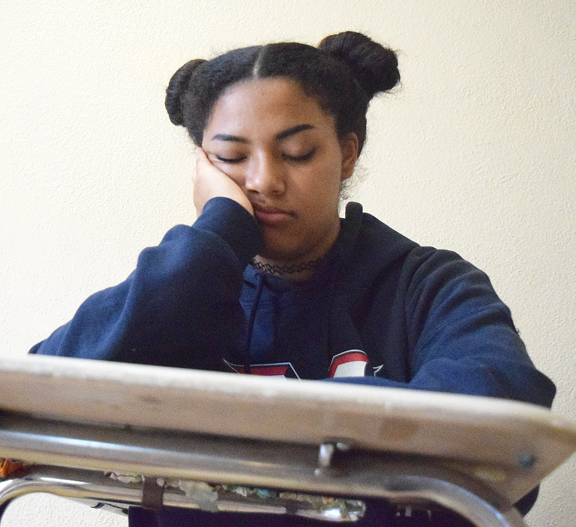 Students like Emma Lobo will continue to stay sleepy due to Governor Brown's veto.

Walk into any first period class and it’s almost a guarantee that you will find 30 pairs of glazed-over, sleepy eyes and at least one student asleep at their desk. But on the desk of Governor Jerry Brown is a bill that could help change that.

Recently passed by state lawmakers, the Senate Bill 328 would push back all start times for middle and high schools to no earlier than 8:30 am. It’s meant to help ameliorate the issue of sleep deprivation in secondary schools.

According to the US Department of Health and Human Services, sleep deprivation creates a multitude of problems beyond simply sleepy students. Among these concerns are increased risks of anxiety and depression. With mental health awareness becoming a main stage issue, many cite this as a reason to change this policy as soon as possible.

Sleep deprivation has also been linked to serious physical conditions, such as high blood pressure, obesity and heart disease.

Other troubles associated with lack of sleep include slowed response time, lack of focus and irritability. These issues have been used to advocate the bill’s purpose as they most directly impact the academic performance of students.

Cecilia Ruiz, a senior in the Performing Arts magnet, supports the implementation of a later start for schools. “It’s medically proven that…your ability to comprehend these things this early and waking up later would help you process the information and store it better. That way you can do better in school,” said Ruiz. “So not only is it inhibiting our learning process, but it’s also creating a barrier between what we can do and what we can do at the moment.”

However, the bill faces considerable opposition. One of its biggest criticisms comes down to practicality. Families, especially many working parents, would have to completely alter their current morning routines for their children.

Another problem revolving around practicality is transportation. School busses would have to rearrange their routes and schedules to accommodate the earlier start time of elementary schools followed by the later start of middle and high schools.

Furthermore, a later start would only push the schools’ end time later in order to meet the minimum instruction hours. So rather than getting out at three o’clock, students could expect to get out as late four o’clock everyday.

Junior Perla Barajas remains skeptical about how much this bill would actually help. “I feel like if school’s gonna start later, it’s gonna end later. I already take the school bus so I would get home even later. Then I’d have to start homework later, and everything gets pushed back. I wouldn’t enjoy it. Sure I get to sleep in a little more, but the amount of homework is gonna stay the same.”

Ms. Reesa Partida, a dance teacher, had similar concerns. “If school were to begin later, rehearsals after school wouldn’t end until after seven. That would leave kids getting home and starting their work even later than they do now.”

Although further discussion has been pushed off until next year, the bill remains a major controversy for state-lawmakers and students alike.